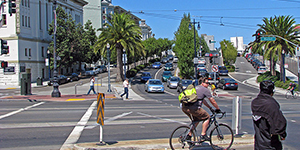 The example of the Central Freeway and Octavia Boulevard offers a number of potential lessons for Syracuse. It seems clear that on balance, removal of the freeway provided a range of benefits to the community without substantial negative impacts for commuters. “Octavia Boulevard is part of a historical compromise,” concluded the 2007 post-project evaluation, “and like all compromises it may not be perfect.” Yet, it continues, “it has achieved its most important goals.”

Opened in 1959, the Central Freeway was envisioned as the first leg of two crosstown highways ultimately connecting the Bay Bridge to the Golden Gate Bridge. Due to a citizen-initiated “freeway revolt,” just 1.75 miles were built. The freeway extended west from Highway 101 as a six-lane, elevated structure before transitioning to a four-lane, two-level facility. At this point it turned north over the city’s main street, Market, into the Hayes Valley neighborhood just west of the Civic Center. Ramps connected to the east-west, one-way couplet of Fell and Oak Streets, and at the freeway’s northern end it transitioned to a north-south one-way couplet, Franklin and Gough Streets. At its peak, the freeway carried approximately 100,000 vehicles per day.

In 1989 the Central Freeway was damaged by the Loma Prieta Earthquake, and the segment north of Fell Street was subsequently demolished. While the California Department of Transportation (Caltrans) began planning a seismic retrofit of the remaining freeway, local officials and citizens, emboldened by the perceived benefits of partial removal of the freeway, began to consider alternatives including a depressed freeway with an at-grade intersection at Market Street. The process accelerated when the segment between Mission and Fell streets was closed for four months in 1996 to demolish the upper, eastbound deck. The gridlock anticipated by Caltrans staff, local politicians and media failed to materialize, and Hayes Valley residents grew accustomed to lower levels of traffic, noise, fumes and vibrations. Around the same time, consensus began to form around a surface boulevard concept developed by Allan Jacobs and Elizabeth Macdonald of the University of California, Berkeley. In 1999, with both freeway retrofit and removal initiatives appearing on the ballot, voters approved the removal of the freeway and the replacement boulevard. The Hayes Valley segment of the freeway closed for good in 2003.

Opened in 2005, Octavia Boulevard features four center lanes for through traffic, landscaped dividers, two side, local lanes and two lanes of on-street parking. It connects Fell and Oak Streets to the remaining segment of the Central Freeway at Market Street. At the boulevard’s northern end, a new park serves the newly revitalized commercial corridor of Hayes Street. Parcels freed up by demolition of the freeway are being redeveloped into nearly 1,000 units of housing. Traffic in the corridor, which had stood at 93,000 vehicles per day before elimination of the eastbound lanes, has fallen by more than half to 45,000 per day, with some of the remaining traffic displaced onto alternate routes.

Early indications are that while some congestion remains, replacement with a lower-capacity facility succeeded in reducing total volumes, and enough capacity was available in the surrounding grid to accommodate any distribution of remaining traffic. Among the evaluation’s primary findings was that, despite the reduced capacity of Octavia Boulevard, traffic along detour routes in the adjacent South of Market district returned in the months after its opening to pre-freeway closure levels. Of the half-dozen points observed, three experienced decreases in traffic, while none experienced increases greater than 10%. This, along with the reduction in traffic on Fell and Oak Streets, would seem to indicate a significant reduction in discretionary trips and overall traffic in the corridor, although a survey conducted six weeks after closure of the freeway’s eastbound lanes in 1996 found that just 2.8% of former freeway drivers no longer made their trips, and just 2.2% of trips had been shifted to transit. However, nearly 20% of respondents said that they had made fewer trips since the freeway’s closure.

Because the new boulevard did not open until several years after the freeway closure, it was initially perceived as a significant addition of capacity for drivers. During the initial weeks after the boulevard opened, the city increased the number of traffic control officers in the area, and it made a number of adjustments to signal timings until the new system reached equilibrium.