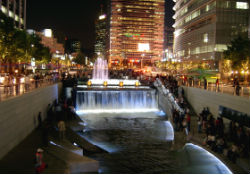 Perhaps more so than any American example, the Cheonggyecheon Expressway in Seoul demonstrates that a major highway can be removed without major negative impacts, when accompanied by a com­prehensive strategy of Transportation Demand Management and transit expansion.

Un­like most major U.S. cities, Seoul enjoyed signifi­cant mass transit use prior to the project. How­ever, like U.S. cities, it was increasingly choking on its own traffic, with average annual increases in the 1990s of 13 to 15%.

The Cheonggyecheon project illustrates the tangible economic and environmental benefits that can flow from urban design that is driven in large part by quality-of-life perceptions.

Through a combination of incentives and disincentives, the city of Seoul, South Korea, has made mass transit a progressively more attractive alternative to the automobile for trips into and within central Seoul. Two key components – the “No Driving Day” program and bus system improvements – were implemented in the months after demolition of the Cheonggye Expressway. These were part of a much larger set of programs addressing congestion, not just in the Cheonggye corridor but throughout Seoul.

Cheonggyecheon (“clear valley stream”) is a former seasonal waterway in the city center of Seoul, South Korea. Between 1958 and 1976, the stream was covered and replaced by the Cheon­ggye Road and Cheonggye Elevated Highway, or Cheonggye Expressway. Prior to demolition, combined traffic counts on both roads were ap­proximately 168,000 vehicles per day, about five-eighths of which was through-traffic.

Between 2003 and 2005, the roads were removed and the stream was restored. The stream is now the centerpiece of a 3.6-mile linear park with new two-lane, one-way streets on each side of the park.

While the city’s official budget was approximately $385 million (U.S.), media sources have estimated the project’s total cost at more than $900 million (U.S.).